Roger's COVID Story - "If you're a micro-manager, you're losing your mind right now" 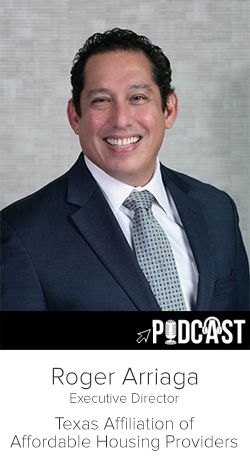 Roger’s commitment to community service includes serving in volunteer roles for the Round Rock ISD as Bond Committee Chair, Student Mentor, Superintendent Appointee to the District Level Committee, and alumni chair for the inaugural class of Leadership RRISD. He has served as president of numerous homeowner associations, was a former appointee to the State Energy Efficiency Advisory Committee, and previously served as Vice Chair for the Austin/Travis County Homeless Task Force.

Arriaga is a former recipient of the Clarence E. Ridley Award from the Texas City Management Association, the President’s Award for Service from the Greater Austin Homebuilders Association and the Commitment to Excellence Award from Build San Antonio Green.

You can listen to or download Roger's COVID Story from your favorite podcast app.

When we first had the idea for COVID Stories, we thought we'd record ten or fifteen minutes and then edit that down to a three to five minute segment. But then the interviews began and it was almost cathartic. Everyone had more to say than could be fit into ten or fifteen minutes. When we heard the awesome insights that were being shared, we realized there was no way to cut anything. So, it's all here.

Also, the COVID Stories interviews were conducted during the shelter-in-place lockdown using Microsoft Teams. What you’re hearing is unedited, unfiltered, and with any call quality issues and technical glitches left in. We’ve all had our share of online meetings during lockdown, so you can probably relate to these glitches that can pop up when you least expect it.